Here's us trying to learn from our craftsmen ancestors: 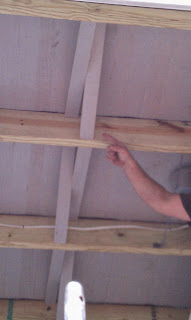 Jeff is pointing at bridging we installed in the balcony floor we rebuilt during our project on Magazine Street.  Bridging serves a two purposes in a floor assembly.  It helps prevent floor joists from deflecting under a load or rolling over all together, as they can do under extreme conditions (earthquakes, say, or wind with a name).  It also helps spread loads between joists, so adjacent joists take some of the weight from their neighbors, stiffening the whole floor.  Modern carpenters use solid blocking to achieve this, usually with culled joist lumber.

Carpenters on really old houses didn’t bother with bridging, but we’ve noticed that by the end of the 1800s they were installing this type of X-shaped bridging, often using the same heart-of-pine  as the finished floor.  We’ve wondered for a while whether solid blocking or bridging is better, and why bridging is no longer done.

We’ve witnessed motley squabbles over the relative merits of bridging in online chat forums, but had never installed any ourselves.  So, on this balcony floor we elected to try it, using culled 5/4x4 KDAT T&G porch boards, two braces in each seven-foot joist span.

It took a bit of figuring to get the first set cut and installed (a collaboration between Mark’s iPhone, Jeff’s hazy memory of an old Audel book on framing-square techniques, plus a little trial and error solved the matter), but after that it wasn’t any slower than solid blocking.  We don’t know that it stiffened the floor more than blocking would have, but according to our scientific jump-on-it test, the bridging certainly reduced bounce in the joists.  The benefits of using bridging include having a use for scrap material; pleased electricians, since they had fewer holes to drill; and that, since we used dried and primed flooring boards, we shouldn’t have to worry about shrinkage: we’ve seen solid blocking, installed tightly, separate from its joists within two months of being installed, thus limiting its usefulness.
Posted by Kerby and Company at 12:57 PM