A reason to spray foam insulation

A while back I dropped an ongoing discussion of various types of insulation -- too complex and important a topic that I quickly discovered I have much more to learn about.  Without plunging all the way back in, let me point out the above photo as a reason to use spray foam insulation.

The photo is of the attic in our largest ongoing project.  The air handler, plenum, and ducts for the upstairs' central air system was (and will remain) located in the attic.  Between the attic and the living space below was some old and intermittent batt insulation.  In south Louisiana, an attic like this, under a dark-colored asphalt shingle roof, reaches unbearable temperatures, even if it is vented.  That means the central air system is pushing cold air through the really hot attic, air that gains temperature before it even reaches the rooms it is meant to cool.  Which means the central air system has to run as much as 20% more than if it weren't in a hot attic.  And all that entails: 20% higher bills, 20% sooner repair or replacement costs...

But here's a problem with a system like this that truly worries me: the hot, humid air in that attic stands a good chance of reaching its dew point on the machinery or ducts, condensing, then dripping into the insulation, framing lumber, or drywall of the ceiling below.  The threat of damage from this condensation increases greatly if any cold, conditioned air leaks from the system into the attic, but it only takes a little drip to ruin insulation, paint, or attract termites.

Spray foam insulation, whatever other drawbacks it may have, can solve these problems by allowing the attic to stay at a temperature and relative humidity close to that inside the living areas.  The central air system doesn't need to work as hard, and damp air is kept outside the building envelope by the foam.
Posted by Kerby and Company at 6:22 PM

Here's an email bulletin sent to us by the State Licensing Board for Contractors, reminding us to conform with the law.   We'd like to remind ya'll that the law applies to homeowners as well.  You are required by the state and by the city of New Orleans to hire contractors who are licensed and insured, or else be licensed and insured yourself.  It isn't just a matter of hiring people who have passed state tests on their competence in the trades.  If you pick up a day laborer from a parking lot, you are liable for all relevant employment taxes, unemployment insurance, and worker's compensation fees.

Requests for Proposals— “RFP’s”
The professionals of the construction industry in Louisiana, architects, contractors, engineers, project owners, and awarding authorities, must remember that “quotes” or “proposals” are subject to the Louisiana Contractor Licensing Laws. According to the definition of a contractor as found in LA RS 37:2150.1(4) (a) a contractor means any person who undertakes to, attempts to or “SUBMITS A PRICE OR BID OR OFFERS TO CONSTRUCT”.  Given that by definition, the law makes no distinction between performing work or merely proposing to perform work, it is the LSLBC Compliance Division policy that we treat both as equal. To submit a proposal for work that requires one to be licensed to actually perform the work, one must also be licensed to submit the proposal. Submitting an “RFP” without possessing a license is a violation of our law and the contractor will be cited for 37:2160 A (1).

The Licensing Board has been consistent in the handling of any such matters, while they may take in to account the fact that the contractor received no payments when deciding what penalty to impose, the Board has found the violators guilty without distinction. The only exception to this would be if the RFP is submitted out of state, in that case we would not have jurisdiction, but regardless of who is requesting the RFP, contractors must be licensed to legally submit a response to an RFP.


“Properly licensed and qualified contractors…It’s the Law!”
For any questions or further information, please refer to the website at www.lslbc.louisiana.gov or contact our Public Information Officer at 225-765-2301 Ext. 213 or via email at kfitch@lslbc.louisiana.gov.
Posted by Kerby and Company at 5:05 PM

Updates on the master suite 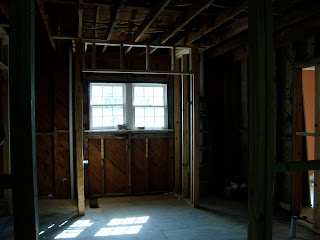 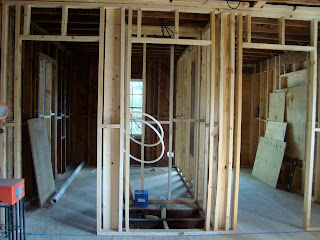 A couple more photos of this project, now that the master bath layout and framing has been finished, and the rough plumbing nearly done.  To the left is the alcove where the soaking tub will be, surrounded by marble tile and to be lit by a purple chandelier, TBD.  We're thinking of doing something fancy with the glass in that window -- any ideas?


To the right is the entrance to Hers and His closets, flanking the shower door, which will be trimmed to match the others.

The existing plumbing in the house is a mixture of cast iron and galvanized drain pipes with galvanized and copper supply lines.  Our plumbers, Garon Plumbing, are connecting their new PVC drains and vents to the existing drain lines with heavy-duty rubber clamp unions.  The new supply lines are PEX pipe, a plastic pipe that's been used for a while in Europe and is finally establishing itself as the supply line of choice in this area.  It's faster to install than any of the alternatives (galvanized, copper, pvc/cpvc), much more resistant to freezing, and cheaper.
Posted by Kerby and Company at 10:42 PM

True to form, Mark Twain is reputed to have followed his profound observation that "Clothes make the man" with the more profound but also hilarious "naked people have little or no influence upon society."

I'll testify that the first line is at least partly true of builders: the tools make the carpenter.

Recently, in the course of working on some small upgrade and maintenance projects for a client, I removed a section of his backyard fence.  Since the painter would also need access behind the fence, I re-installed the section to approximately the same degree of sturdiness and durability it had before: not much.  While reviewing the work done with the homeowner, I told him this, and said, "that section of fence is less than-".

Laughing, he pointed out, "don't say too much, I built that".

It had been an effective and noble effort for a busy dad with a hand screwdriver and a sweaty afternoon, no question; but having the correct tools for a job can be nearly as important as having the knowledge to carry out the job.

I should be careful saying such things: in a cavity-filling contest, a dentist with blacksmith tools would probably draw less blood than a blacksmith using dentist tools.   But quality tools, the right ones for each particular task, enable a higher quality of finished product at a better price than inferior tools.  This isn't to say that, with a sufficient investment in fancy tools, the average homeowner should attempt to remodel his bathroom, or that a sufficiently talented carpenter could not, in time, build an incredible Queen Anne-style home with only a handsaw, a chisel, and a hammer.  What I meant by "tools make the carpenter" is that the tools help represent the carpenter's attitude about her work and the quality of her finished jobs.

A craftsman working on your home with a beat-up, cheap-looking, aluminum spirit level and a dollar-store miter saw with a dime-store blade clearly has little interest in the finished appearance and longevity of his work.   Conversely, a craftsman whose tools are both expensive and flawlessly neat may be spending too much of your money coddling his precious specialty saws and clamps.
Posted by Kerby and Company at 9:36 PM