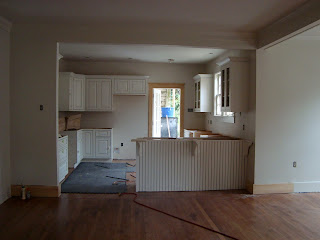 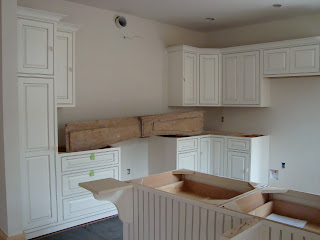 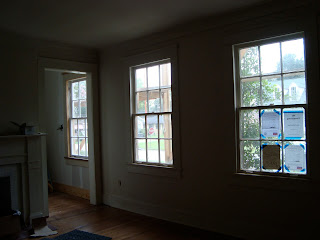 The salvaged trim details in this new kitchen came from The Bank Architectural Salvage on Felicity Street in New Orleans.  We'll have them painted with a faux finish to approximate the finish on the cabinets.

The window on the left takes the place of a door to the former upstairs apartment on this house.  Now the cased opening by the mantel, which used to be a wall and bookshelves, is one of two pathways to the stairs.
Posted by Kerby and Company at 8:05 PM

Keen readers may recall Michelle & Simone's remodel project, a combination kitchen overhaul, master suite creation, and unification of two apartments.  I've been remiss in not posting updates on that project more often: the last photos on this page are of bare studs, but believe me we haven't been idle.  Here are some more recent images, soon to be followed by current ones. 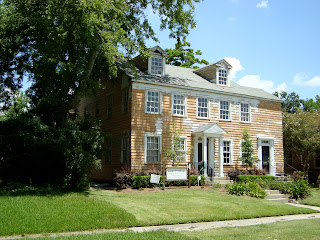 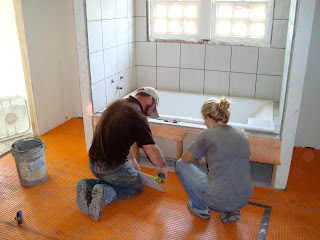 First, the exterior.  Nearly midway through the interior projects, we increased the scope of work by removing vinyl to reveal the house's original siding.  After making repairs to squirrel-eaten cornice returns and re-glazing windows, we and our painters, M&R Painting, removed all the old lead paint (being as much in compliance with RRP rules as possible in a Louisiana July).  The house is in the final stages of prep for a new coat of paint and the addition of operable shutters on the front.  Oh, and we also removed the door on the right hand side, replaced it with a window, and added another window above it.

Jackson and I are adding the final pieces of tile on the tub deck.  The orange on the floor is a ballyhooed, possibly over-sold, possibly genius material called Ditra-mat.  (www.schluter.com/) We've used it on numerous tile jobs, putting faith in the material because it is both German and expensive.  Therefore it must do its job, right?  I should confess that I suffer a form of neurosis regarding tile floors.  I'm not comfortable with standard practice.  We added a plethora of  reinforcing blocks in the framing, a layer of cement backer board, a high-end Swedish leveling cement, plus the Ditra-mat.  I hope to report in two hundred years that the tile is holding up just fine.   I'll admit there is an unfortunate consequence to all those layers.  The tile floor is now an inch taller than the floors in adjacent rooms. 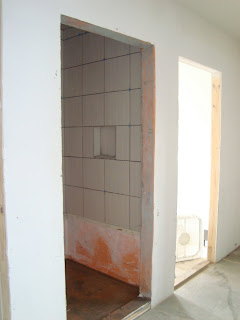 This is the shower, nearly tiled, and undergoing a second water test before having the tile finished.  We plugged the drain, filled the shower floor with water, marked its level, and left it alone for a day.  Tiled showers too often develop leaks, which quickly causes the need for major, expensive repairs.  We like to be extra-sure that leaks aren't present from the beginning.  Then, when completing a project, we bombard the homeowners with reminders to check regularly for cracks in the grout, and to deal with any cracks immediately -- just in case. 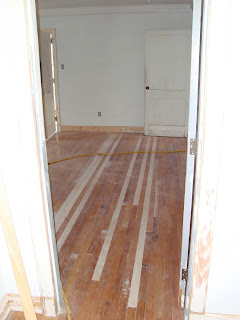 This is a view from the hallway into the master bedroom.  The differing floor color is a result of us re-laying the section of floor on the right.  Where the lighter colored floor on the left is used to be the hallway wall, which we removed to add about forty square feet to the bedroom. 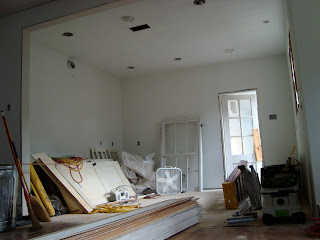 Finally, the kitchen-slash-storeroom.  It's an embarrassing mess in this photo, but I include it for the sake of contrast.  We had the cabinets installed yesterday by Sexton Cabinets.
Posted by Kerby and Company at 5:40 AM

After wind and rain

Now that Tropical Storm Lee has passed us by, it seems a good time to urge all you homeowners to be prepared for the next time we see one of these close up. 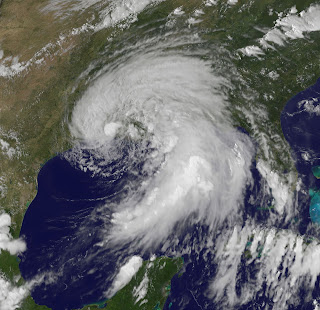 First, clean your gutters out.  They're sure to have a lot of debris that will lower their effectiveness in the next rain.

Second, consider your windows.  Any leaks?  Rattles or loose pieces?  Panes that need to be reglazed?  (Hint, if the glazing is missing, dried up, cracked, or generally looks ancient, it should be addressed.)

Third, are your shutters in good, operable condition?  If you don't have shutters, do you have plywood already cut to cover your windows in the event of a big one?  And is it accessible, or buried under a thousand paint cans or a compost pile?

Fourth, how is your roof?  Check your ceiling, attic, and rooftop for leaks, loose shingles, floppy flashing, exposed nails, missing or dried and cracked caulking.  Even if you didn't have leaks during Lee, investing in some maintenance work by a roofing contractor could save you from spending a lot more money with roofers and a lot of other contractors in the future.

Finally, back to the windows: can you open yours?  If not, will your central air system work if the next storm knocks out power?  Air conditioning has convinced many people to caulk their windows shut -- a terrible idea if you ever lack power.  Plus, Lee seems to have blown in autumn, a time of year when a one-time investment in window screens could allow you to turn off that central air machine for a couple months.
Posted by Kerby and Company at 6:15 AM